Going Places with "Of Butterflies and Lullabies & Unfinished Conversations" 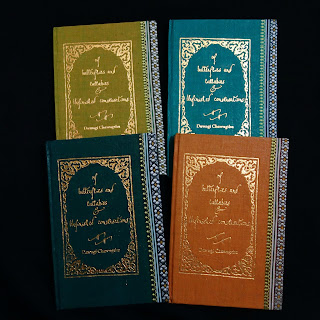 It was a proud moment on Wednesday the 10th February when our very own Dawngi Chawngthu formally released her first collection of poetry, "Of Butterflies and Lullabies & Unfinished Conversations." Containing 55 poems, spanning 86 pages and costing 200 Indian rupees, it is a slim, hardbound volume published by Writers Workshop, Kolkota. This is only the third collection of poetry published by a Mizo writer in English - the other two being Laldinkima Sailo's Spectrum: A Plethora of Rhapsody, published 2002, Imprint, and Tinkim Dawn by Malsawmi Jacob, a collection of poems written in English as well as in Mizo, published 2003, Mizoram Publication Board. Mizo writing in English is so niched, so specialised that few actively pursue it, and fewer still publish it. But for the few that are involved in it, it is our chosen mode of creative articulation, and one we are fiercely loyal to despite little to no public acknowledgment or recognition.

A little clarification first: in May 2014, Malsawmi Jacob published Zorami, a novel dealing with Mizo history and more specifically the Insurgency Movement of 1966. While most of us had believed it then to be the first ever novel published by a Mizo in English, two books popped out of the woodwork - Facebook Phantom, pub. 2013, Duckbill, by Suzanne Sangi, and Jo's Journal, pub. 2014, Notion Press, by Sarah Aineh, both young Mizo women (and coincidentally both only 17 when they wrote their books). While I have not read either, I gather from reviews that both are classified as young adult fiction and make for light, easy reading. They are entitled honourable mention in any discussion of book publications of Mizo writings in English.  Zorami, however, stands a class apart and must hold indubitable place of pride as being yet the only fictional prose work in English by a Mizo writer to painstakingly sculpt a plot within the Mizo ethos and present to a worldwide readership a novel that is uniquely, unquestionably and comprehensively Mizo in context.

To get back to Ms. Chawngthu's volume of poetry, the 55 poems are divided into two sections - "Unfinished Conversations" contain poems written for her late mother, some directly addressed to her and some written around her. The other section "Of Butterflies and Lullabies" are a fusion of love poems, personal poems, poems that explore the challenges of women and poems that raise questions on a number of social issues. I remember Dawngi at university, forever scribbling on her notebooks snatches of song lyrics, bits of poetry she found somewhere that resonated with her or that she wrote herself. Then we lost touch. It was only in late 2007 that I found something on a friend's blog that Dawngi had written in Mizo, which caught me by surprise because I didn't remember her writing in anything other than in English, and had certainly never known her to write on social issues. Butterflies has the English version, Lucky Zo Lanu, translated by Dawngi herself, where she cleverly turns the incessant social conditioning of young Mizo girls on its head by pointing out that Mama, the young Mizo boy, needs all the advice and teaching far more since he is the keeper and future torchbearer of the tribe.

What I have always loved about Dawngi's writing is that she writes so simply and effortlessly. No superfluity, no theatrics, no showing off of vocab or forcing on of vague, shadowy allusions. It's so clean and simple, you think, "Oh, I could write stuff like this too" but uh, not really. The apparent artlessness and easy flow of words and thought are skills not everyone is born with, and most definitely not the adept way she rounds off a poem. I tend to never quite know how to phase out a poem to a nice uncontrived ending but Dawngi does it time and again in a way that has me thinking, "Wow, that was smooth" in genuine admiration.

Over the years, through the privilege of being an old friend, I have had the opportunity to put up on this blog a number of her poems. The first time was in July 2008.  Of the two posted then, both of which are included in Butterflies, The Mask, so vulnerable, wistful, and uncertain, yet tentatively hopeful, remains my favourite. Another favourite, also in the book, is Dead Butterfly - dark, brooding and so desperately, hopelessly sad.

taking a stroll
through the wastelands
of your mind

you will find me
sitting in a darkened corner
a dead butterfly in my hand.


To Dawngi, and to Mizo writers in English, may our tribe increase!