Identity and other poems - Malsawmi Jacob 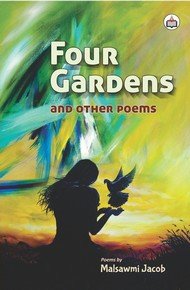 My voice may sound a bit strange
seem to be singing off-key
as I go for minor modes,
not being majoritarian

We’re rich in tales and legends
stored in our collective-conscious
but have little written history
since the only manuscript we had
on leather scroll, was kept unguarded
and stolen away.

Nevertheless, we are part of
universal brotherhood;
the sky and earth are ours
as well as yours.

They couldn’t stand your prophetic voice
that spoke against their misdeeds
as night after night you sang your songs
in your lonely hut
Your gong music enchanted them
melody drove them wild
but the lyrics did the mischief –
the lyrics pierced their hearts.

You derided their philosophy
wouldn’t sing their eulogy
after a successful raid,
tried to stop them dating lasi [2]
told them to choose tlangsam [3] over kangthai [4]

Their annoyance grew day by day,
decided to silence you altogether
Shut you out from golden sunlight
wind and call of chuk-chu-ri-kur [5].

Your gong still rings under the earth
Bong! Bong!
A disturbance in tyrants’ ears.


* The first known Mizo poet. She was buried alive supposedly for going on composing songs.
[1] The place where the spirits of dead people were believed to go. ‘Heroes’ who had slain many enemies and animals were supposed to receive a special treatment there.
[2] Wood nymphs who helped men they fell in love with to shoot many animals.
[3] A plant used for healing wounds.
[4] Nettle
[5] Spotted dove

On blue mountain the songster sits
guitar strings all broken
the song becomes a tuneless chant:

Will the great bear turn around*
over our bamboo hills?"

* signifies the coming of dawn


Malsawmi Jacob is among our foremost Mizo writers in English and her work has been featured on the blog a number of times over the years.  These poems are from her recently published book of poetry titled Four Gardens and Other Poems available on amazon.com. The collection is divided into seven thematic sections and the three pieces selected here are from the section entitled Roots, dealing with her ethnic identity and cultural origins.

I don’t remember the first time
I heard the national anthem
nor the first time I learnt to sing
“Jana Gana Mana”at the top of my voice.
It must have been in one of the schools I went to
for my formal education, for mark sheets, for certificates,
for documents I have now learnt to laminate
(to avoid tear and wear)
because I know they are as important, if not more,
as the beat of my heart during job interviews.

I don’t keep count
of the number of times I have sung the national anthem
duly standing in attention
but it can’t be less than the number of anniversaries
India has celebrated its Independence day.
Yet my tongue refuses to caress the words of the anthem
with ease and eloquence
and fumbles, instead, through the lines
like my fingers did
the first time they learnt to type on a computer keyboard.

You see, every word in the national anthem
is a challenge to my tribal tongue
that is more used to a slightly altered version
of the English alphabet than it is
to the Devanagari script.
It must be of no surprise to you then
that the meanings of the words, and the lines
are as evasive to me,
as the colours of the rainbow are
to my colour blind eyes.

So when you get confused about my identity
and where I am from, the God I worship,
the way I dress, the way I look and behave,
and the lores that lure me,
remember that I am just as confused
for I am alleging my loyalty to a country
through an anthem
that has to be explained to me
for me to understand
what it means.


Lalsangliani Ralte speaks for every Mizo, and possibly every Northeast Indian, in this poem about linguistic and socio-cultural differences, while at the same time affirming allegiance and loyalty to the mother country.  I have deliberately chosen to post this on the 71st anniversary of India's Independence Day.


Thank you, Sangliani, for being our voice.