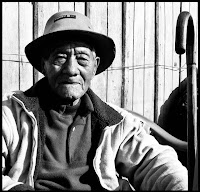 It wasn't long ago that I learnt Giants walked among us. They were not 30 feet tall and physically imposing nor were they frightful or terrifying. They didn't conquer you with their muscles nor mock your weakness. They did not walk above us. They look just like you and me and for the most part didn't even know they were giants and neither would you; until they leave. No matter how frail they look on their death bed, no matter how fragile their bones, you feel the weight of their history, their enormity and you are humbled. The spaces they leave can never be filled for we are we and they, Giants.


The story  -  A government official at Sialton in eastern Mizoram proceeds to his new post in southern Mizoram with his family, breaking journey at the parachronistic Hotel Odyana in Zolawn, where an old discarded Shillong Times brings back memories of a buried romance which perhaps all happily married men would have shrugged off. What he reads there is an echo of lovers’ familiar heart-to-heart communiqué plus news about an ill-fated marriage of the girl he loved once. But the Sialton Official (thus known), like Pandora, must open the safely locked past with this key, and bring about ruin and death. His indulgence with memories of a romance with a tea-girl in Shillong leads to another indulgence to cure the first indulgence, and bury his loved ones in the other love. From his drunken torpor he is rudely awakened by cries of “Hotel Odyana is burning! Your family….”  He loses everything except remorse and, Oedipus-like, wanders Cainfully bearing his sin and punishment, while to all men he becomes the very sainthood of Penitence. His forgiveness finally comes where he had sinned, in Zolawn, to which his daughter’s voice has been driving him relentlessly, to find peace and self-forgiveness. With his salvation the whole community comes alive to worship and hear his testimony of the Miracle of Love.


Some early novels familiar to Mizo readers are romantic love stories with tragic endings. As in Hardy’s Return of the Native, a young man returning from civilized world to his native village in the hills typically becomes ‘the eye’ in society, winning favour and love, and rivalry: a perfect stereotype setting for a sentimental plot. But Sialton Official is different in that the romance and sentimental elements take a back seat, and practical life is foregrounded, at least in the setting. Shillong was a conventional name for education till recently, and an occasional tale of romance with a local beauty is not unconventional, for it does not seem as romantic to go gallivanting with one of the same tribe; and marriage was hardly ever the goal of such relationships – there being an unspoken taboo-like consensus against inter-tribal marriages. Any such inter-tribal amatory relationships came under a cloud of displeasure from both the communities. But it is the memory of a romance that we are dealing with, not the actual event, which had been sealed fast in Time’s sepulchre, incapable of meddling with the present life. Or is it?


To compare such a happy memory with a Dracula or a raised Mummy and the unspeakable fear they evoke may seem farfetched. But the catastrophe attending on it is no less horrible than such visitation from the nether world.

And Dorothy may yet be living in St. Mary’s Convent with her daughter after the death by drinking of her husband, when her SOS reached her old lover. It is no evil hand reaching out from the grave in a fit of jealousy of his good fortune in love that bewitched the Sialton Official. Nor can we blame Dorothy for putting that bleeding message, knowing she has no hope of her distant fiancé riding against the wind to rescue her. The message may just be a ‘heavy weight of hours’ sighed out for relief – a shy, unadmitted ‘if’ betraying her need of comfort in her solitude  - an undiscarded image.


Pillowed upon my fair love’s ripening breast,
To feel forever its soft fall and swell,
Awake forever in a sweet unrest.[2]

What kind of love is this that can cut across a happily concluded marriage? Is there a different kind of love outside the marriage institution? In Medieval Europe the amatory aspect of love was institutionalized in ‘courtly love’, with the effect of relegating married love to the status of domestic order. The majority of Medieval poems celebrate love within a religious framework by which the lady is an ideal of beauty and chastity to whom devotion is due as prove of an ideal knightly character. Marriage is not the end of this holy quest, for an ideal possessed loses its value as an ideal. The beautiful lady is an ideal inspiring love and devotion till she becomes a possession. Love idealized thus is an intangible vision that illuminates the object. And when the Sialton Official cryptically remarks, “I reached for the star without climbing whereas she looked in vain for a bridge where there was none,” there can hardly be a better way of stating the situation of such relationship, showing that love is a two-way glass, man and woman having different concepts about love. According to this, man idealizes love, whereas woman sees it as a means. Man needs woman to light his life, but woman demands his very life. He loved, not Dorothy, but what he saw in her - a very Desdemona. And to Dorothy, he is a daydream, a mirage, the handsome knight who never stays. Both went separate ways to marry and kept their love alive, but closely, so closely they both thought they had buried it under marriage vows. The dead never rise, but the undead.


For Othello, Desdemona incarnates his concept of Beauty and Love. It is not Desdemona dead but the dead in Desdemona that raised the chaos in him. Man as husband and father plays his role smoothly when the undiscarded image of love lies dormant. The loss of husband, albeit a drunken one opened the chest that had confined love in Dorothy, and like Pandora, let loose the winged scion of Love whose arrow pierced the once wounded heart of  the Sialton Official on that ill-fated evening in Odyana Hotel, with catastrophic consequences.


Once Dorothy, ideal love incarnate in “Queen of the days I loved,” lives again, the other love incarnate in his wife (the ideal wife) must die. And husband too. But not necessarily in the flesh. Thus the pain of physical death is not felt by his wife and children but him alone; that is, the text saved them the horror, the fear, the burning heat and the suffocating breathless smoke. It is him so rudely called from another world that bore the full painful consciousness of death.  They are the sacrifices at the altar of the goddess of love. But the cost, so dearly paid by the penitent – of what worth is it made to serve?


The answer to this has to be the conclusion of our brief critical adventure. But there is yet an unvisited but familiar spot in love’s empire: the hill of Platonic love where true devotees of love find fulfillment. For Plato the object of love is perpetual possession of and union with the good.[3]  In literature woman more often as not objectifies the good “in her self-possessed, witty, modest and circumspect nature, ready to face life on her own.”  [4]“. . . love of a particular person leads to the discovery that beauty of soul is more valuable than beauty of body." [5]


Such beauty engendering love in man is observed in most of Shakespeare’s heroines who possess a kind of beauty that can turn cold the heat of lust. Marina of Pericles, Imogen of Cymbeline, Portia of The Merchant of Venice, among others, are the quintessence of beauty that does not rust in marriage.The seemingly wasted goodness of a Cordelia, an Ophelia, or a Desdemona constitutes an honest admission of the insignificance of human virtue in the context of an impersonal, apathetic and consciousless cosmic order. In such a universe, man is the only ‘measure of all things, of those that are that they are, that are not that they are not.’[6] Man must make his virtue meaningful in himself in order to save himself the pain of existence, or perish in the limbo of his own agnosticism, or hang precariously in the swing of ontological relativism. The Sialton Official chooses to live, to go on, and ‘BE,’ to make the sacrifice of his loved ones meaningful, for himself and for humanity, and leave an unforgettable legacy of Love.

Dr. R. Thangvunga is an Associate Professor in the Mizo Department at Mizoram University. This seminar paper which examines this short fiction was presented at the National Seminar on Mizo Fiction  organized by the  Department of Mizo, Mizoram University, at Aizawl, in 2011.

Posted by Zualteii Poonte at Wednesday, August 01, 2012 No comments: