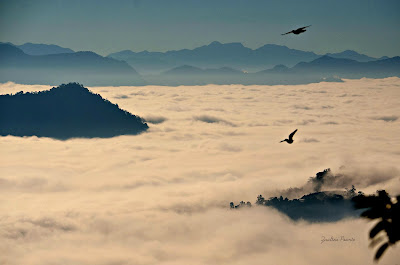 It happens late in the year every year, around the time when the rains taper off and the harvests in the rice fields begin to ripen and glow golden in the sun. From the wee hours past midnight when earth people are in bed in blissful slumber, the fabled van mi or sky people leave their homes in the sky to stealthily descend to earth for a few joyous hours of bathing and swimming. Under the pale light of the moon, between mountains and high hills, they create huge pools of spray and water that is so pure and white it looks like soft, downy cotton wool. The pools cover entire valleys, stretching from one far distance to another, running up the sides of mountains and creating occasional happy little islands in the middle. Some pools sweep across vast expanses like tumultuous, turgid  seas while others are sandwiched between mountains and towns like hungry rivers. In the bewitched pools, the sky people play, float, glide, skim, sail, romp, wade, gambol and frolic around to their heart's content. Sometimes they take gravity-defying dives off cliffs or jump from trees into the surging white waters.

Then as the sun awakens and unhurriedly rises, lazily stretching out its brilliant rays over the mountain tops, the sky people sigh and begin to gather their things to go back to their homes in the sky. A few dawdlers, reluctant to leave the water, linger on but as the sun gets stronger and the world gets warmer, the waters in the enchanted pools dissipate slowly till there is nothing left but empty air and mist. One by one, the lingerers too return to their homes. The pools remain amidst the mountains and rills for a while as earth people wake up and rub their eyes in marvel at the sight outside. By the time the clocks on the earth people's walls point to eight, the pools have mostly all disappeared. Late risers who are excitedly told about the magical pools thrust their necks out of windows but see nothing but green valleys and hills.

Zualteii (A. Hmangaihzuali) Poonte is the owner of this blog.  She teaches English literature at Aizawl College and is also a keen amateur photographer. The featured photo, which partly inspired this piece, was taken by her in November 2012.