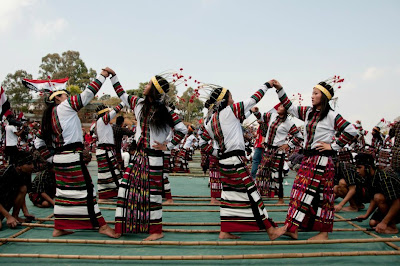 I cannot place it in terms of the bigger picture

but it's somewhere south of where i am; here,
a place that is built on some great mercy of Providence
with houses teethering on cliffs.
We are known for our dance that have bamboos snapping at ankles,
as our young men and women, dressed in tradition's best, hop in and out.
The essence of this dance is the understanding of rythm and balance,
where one wrong movement would lead to disaster.

This dry and dusty place boasts of small towns and big houses,
with comprehensive differences in warmth and sizes.
Out of these, the hopes of future generations,
hardly able to walk with pants worn at knees,
and shoes that can feed a family for months
(but what is food compared to the latest fashion).
Subbing identity for brands, a living, breathing advertisement.
and in their coolest, hippiest ignorance,
sing along to an apt tune
"Pretty fly for a white guy"
(O well,you know he doesn't really get it anyway)

We also have our share of democracy's champions; the politicians,
who in years of election give huge contributions to charity and churches.
(for votes mind you.....keep your salvation)
Then the righteous elders that go home to ignored wives and children,
and illegitimate grandchildren,
that sit around a table for a perfect family portrait, and pray,
to a God that does not live within them.
we also have our revivals, as the crowds go,
in throngs, to see the magic show.
The deaf hear, the dumb speak, the children see,
visions of angels and Christ; slowly,
convincing ourselves of strengh in our shaky faith.
Multitudes would bow in awe at the spectacle

A word of praise for our ingenuity,
we do not have liquor here, but we find inventive ways to get high,
off household appliances and medicines.
Mean those meant to fix meant for a fix.
And Jim, poor Jim.
He's hanging on a shoestring.
The diluted blood in his veins ran cold.
His relief from pain became his pain.
And in the songs of mourning and accompanying drums,
mother would cry,"...it's my fault!"
Silent father would whisper,"..it's my fault."
In the corner of each isolated spot, they would discover
repentence,
regain the rythm to the dance,
but Jim,poor Jim,
He is dead.