Amid these hills where once we lived I retrace my steps... 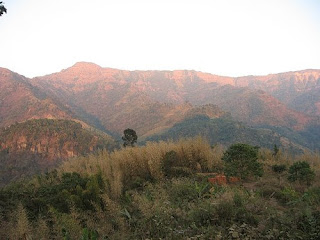 So the native had returned to relive the dreams of his boyhood, and to savour the happiness associated with his first visit. But as you would have seen, this was not to be. No doubt there was satisfaction in being able to come back after 25 years, to physically touch the places which could not be reached the first time, to actually drive on the roads one had initiated, and see that at least a few of one's suggestions had been implemented. At the same time, I was sorely disappointed.

By this time you will have appreciated that the romance and mystery of all these places are closely interwoven with the encircling environment, in particular the trees and foliage surrounding them, the thicker, the richer, the bigger; the better. The variety and richness of the fauna, in turn, depend on the size and quality of the flora. Unfortunately, the loss of forest cover has been accelerated ever since the abolition of the Chiefs who were fiercely protective of their forest lands. Since then I saw, as some of you have also seen, the extensive damage to forests caused by jhumming, fire, badly planned and even worse executed developmental programmes, reckless exploitation, indifference, selfishness and greed. Even as far back as the early 70s, as one flew by helicopter throughout the length and breadth of Mizoram, it was rare to find a good forest stretch except in the far-flung areas. I had thought that my sensitivity on this score was, to some extent, blunted to such destruction. I, therefore, accepted as inevitable the fact that, between Seling and Champhai, there is no more forest, no more blooming Vaubes, nor a single orchid to be seen.

Still, I was totally unprepared for the shocking discovery at 'Lianchhiari Lunglen Tlang', 'Tan’, the two sites of 'Fiara Tui' and 'Rul Chawm Puk', where some of our most precious non-tangible heritage sites have been vandalised and ravaged so wantonly by the complete destruction of their environment. It was as if our inner-most recesses had been forcibly prised open and exposed to the forces of destruction, and our very roots being severed. The beauty, the romance, and the mystery of these places, and yes, that indescribable 'presence' of the spirits associated with them have all been irredeemably diminished. How did we allow things to come to such a pass? Was there no one who cared? How many more of such cultural and heritage sites have met a similar fate? Have we been conducting ourselves so dismally in other fields as well? Where do we go from here? Would we be able to have a change of heart, undergo a process of transformation, and begin the task of restitution?

Various conflicting thoughts had then crossed my mind. And I hoped against hope that there would be a comeback, a restoration, that it would come to pass in the next century. Then the flora and the fauna would return. Fiara would come back to his spring, which would no longer be dry whatever the season. Lianchhiari would remain undisturbed in her dwelling place, shaded from sun and rain by the woodlands, and comforted by the chirping of birds and the buzzing of bees. Chawngtinleri and the 'lasis' would be back, riding their mounts. She would resume weaving at her loom from the rocky cliffs of Tan and Lurh, and the Vamurs would once again criss-cross the skies towards Ramzotlang, and thence onwards to Zopuitlang.

And as for me, I will then retrace my steps once more....

I am deeply grateful to P. Rohmingthanga for allowing me to reproduce his deeply-felt, beautifully-written travelogue on this blog. New readers may refer to Part I and Part II in previous posts.

Email ThisBlogThis!Share to TwitterShare to FacebookShare to Pinterest
Labels: travelogue